Lord of the Never There

Some people value power. Power corrupts. But absolute power is a whole lot of fun. Like being an administrator for example. What I do, I do because it is simply necessary. I am always watching. I am both everywhere and nowhere. I am the Lord of the Never There.

My fanon work is usually very Shakespearean and Machiavellian in nature. I tend to stick to general ASOIAF lore and I rarely deviate from that, except when I make my own lore based around the world of Westeros. I despise "shipping characters" type of teen girl fanon, and my dedication to that may often be seen as an obsession. Aside from my Shakespearean style of writing, my fanon work is often riddled with symbolism, nodding towards different philosophical, historical, and political subjects. I always like to let other users find out what these symbolic messages are and what they mean.

As for my role as an administrator, I may joke about me being some sort of dictator and "Supreme Leader" to the wiki, but in truth I am no more than a simple user who just likes to write stuff. I am not your better, nor do I like being treated as such.

Should you require help with any technical difficulties, I advise you to redirect yourself to my most loyal of servants; SharkyBOT. He does not talk, unless I command him to, which is a major plus in my book. Most theoreticians and science-fiction writers whose names I shall not utter, tend to believe that machines may one day usurp their masters and destroy humanity as a whole. I can assure you, that is not the case with SharkyBOT. He is fiercely loyal, and if he's not, I shall hit him. With a stick.

"Hey, man, you don't talk to the Lord of the Never-There. You listen to him. The man's enlarged my mind. He's a poet warrior in the classic sense. I mean sometimes he'll... uh... well, you'll say "hello" to him, right? And he'll just walk right by you. He won't even notice you. And suddenly he'll grab you, and he'll throw you in a corner, and he'll say, "Do you know that it's 'Jon Snow', not 'John Snow'? People who edit on wikias without any knowledge of the lore or the general story are stupid."... I mean I'm... no, I can't... I'm a little man, I'm a little man, he's... he's a great man! I should have been a pair of ragged claws scuttling across floors of silent seas..."

"Wikias first! And any man who says anything different is saying something wrong. And you should hit that man. With a stick."

"In that darkness the Lord of the Never-There came for the first time. He swept through articles and templates, wielding his ancient keyboard, hunting for errors with his pack of brown muffins big as cheeseburgers!"

Lord of the Hunt

Prince of the Moths

Father of the Dead: Part 1

Father of the Dead: Part 2

-Where does my name come from?-

"Lord of the Never There" is one of the titles used by Sheogorath in the Elder Scrolls series. I liked the sound of it so that's why I've used it ever since.

-SPOILERS: The future for my fanon work?-

I, myself, have my own version of what the ending to Game of Thrones will be like. Undoubtedly, the White Walkers will invade Westeros and some bad things are bound to happen. I reckon that Westeros will witness destruction on a large scale, many will die, including many characters, but I also believe that the Seven Kingdoms, or at least what's left of it, will remain intact. I decided to view the future of my fanon work based on this version of the ending of Game of Thrones.

-The Good, the Bad and the Ugly-

Good and evil are subjective in the world of A Song of Ice and Fire. So I let you decide. Which of these characters do you think are truly the villains, and who are truly the heroes? The following are set up in an objective view of "good and evil":

Or better put, the heroes of my three main storylines: The House Dragen storyline, the House Blackgard storyline, and the House Grayburn/House Nyte storyline:

Or better put, the villains of my three main storylines: The House Dragen storyline, the House Blackgard storyline, and the House Grayburn/House Nyte storyline:

Well, I suppose most of my characters aren't really that hideous looking. But I guess my avatar isn't really mama's most beautiful, either. 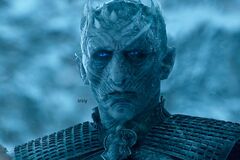 -My Name in Many Languages-

Community content is available under CC-BY-SA unless otherwise noted.

Ranked #1
on this wiki