A black shadowcat rampant on a starry night.

Old Gods of the Forest

"We were a powerful house once. Some hundred years ago. Back then, we wielded fear like a weapon of mass destruction. We were feared, and we even rivalled with the Starks in terms of strength. And then one foolish ancestor after another lead us into disgrace when we were faced with extinction, and we had to turn to the Grayburns for help. Since then, we became a laughingstock. Ridiculed, belittled, cast away. All I ever wanted, was for us to become powerful again. And if that meant I had to kill, torture, betray and destroy every Stark and Grayburn living I would've done it over and over again."
―Rodrik Nyte, to Sansa Stark[src]

House Nyte of Darkmyre is a noble house from the North. They rule the castle of Darkmyre and the head of the house is the Lord of Darkmyre.

The Nytes were once a minor noble house holding fealty to House Grayburn of Brightbank. However, after the Red Wedding, the lord of the house, Trytas Nyte, was betrayed and murdered by his own son, Rodrik Nyte, who was conspiring with the Boltons ever since they devised the plot to overthrow House Stark.

Their ancestral weapon is Nightfall, a blade forged from obsidian by the Children of the Forest, and is by far the oldest forged weapon known to man. The knight from the house who wields the sword is granted the title of the "Dawnbringer".

Following House Bolton's defeat at the Second Battle of Winterfell, Rodrik Nyte, the Lord of Darkmyre, is captured and imprisoned at Winterfell. However, Jon Snow later parleys with him, convincing Rodrik that the Army of the Dead will soon consume the North. Rodrik then reluctantly pledges allegiance to House Stark in order to defeat the Night King, pardoning House Nyte and restoring their lands and titles.

House Nyte's heraldry consists of a black shadowcat rampant on a starry night field. The Nyte words are: "Fear the Night".[1]

House Nyte's history is shrouded in mystery. There are different stories on House Nyte's origins. The most popular theory, is that the Nytes originated from the "Nightlords", an ancient and mythical race of the First Men that were consumed and corrupted by the eternal darkness of the Myre, a valley-region in the North. Even the Nytes themselves have no clue by who and how their house was founded, as there are no official documents or transcripts left that hold any credible evidence of House Nyte's origin. As far as anyone knows, the Nytes have always existed since the Dawn Age.

House Nyte are bitter rivals of House Darkoak of Oakridge Hall and alongside them, have served House Grayburn faithfully as bannermen for five centuries. At some point in time, the Nytes allied themselves with the Grayburns. Presumably, the Nytes faced near-extinction at one point and in order to protect themselves, they sought help from the Grayburns. They offered the Nytes a sizeable amount of soldiers and weaponry. Since that day, the Nytes chose House Grayburn as their liege lords.

Somewhere during House Nyte's supposed founding, the Children of the Forest forged the legendary obsidian blade Nightfall. According to myth, Nightfall was wielded by an ancient Lord of Darkmyre against the White Walkers during the Long Night.

During the War of Conquest, the Nytes were one of the first houses who surrendered to the Targaryens, out of fear rather than respect.[2]

Sometime after the War of Conquest, the Nytes and Darkoaks nearly went into open warfare after a scandal between the two Houses went horribly wrong. Selwyn Darkoak and Alessa Nyte fell in love with each other, which prompted Alessa's father, Lord Simon Nyte, to march onto Oakridge Hall with a force of fifty men to confront Selwyn's father, Lord Jaremy Darkoak, demanding for Selwyn to be punished and whipped. Jaremy, not standing idly by while his rival insults his son, marched outside with his household guard. It was at this point that Lord Arving Grayburn came to prevent the debacle from escalating further. After a five-hour long negotiation, Simon stepped down and returned to Darkmyre, but the two lovers were henceforth forbidden from ever seeing each other.

Trytas Nyte and his men are present when Robb Stark is proclaimed King in the North.[3]

In a conversation with his squire Sammith, Carmine Grayburn reveals that House Nyte were his father's oldest bannermen and talks about their rivalry with House Darkoak. He goes on to tell the story of Lord Trytas' son, Rodrik Nyte, who he claims to have known for "his entire life". Carmine also mentions that, before he was betrothed to Taria Dresden, his father considered betrothing him to Tesha Nyte.[4]

The Nyte force lays siege to a Lannister-overrun Stoney Sept, with Rodrik Nyte constantly launching rocks with a white cat's paw painted onto the town to annoy the Lannister general. As Rodrik expected, the Lannister soldiers turn on their general and kill him in exchange for safe passage off the Riverlands. However, Rodrik and his men turn on the Lannisters and he hangs them above the gates. They also put Stoney Sept to the torch and all the citizens to the sword.[5]

At the infamous Red Wedding, Trytas Nyte is betrayed and murdered by his own son, Rodrik Nyte, whom men infamously call the "Ghost of Darkmyre", due to his status as an albino. In the aftermath, Roose Bolton reveals to Walder Frey that Rodrik has been plotting with him since the very beginning and in turn, Roose allowed him to abandon House Nyte's allegiance to House Grayburn and instead, pledge fealty to House Bolton.[6]

Tensions are still high with Houses Nyte and Grayburn. In the confusion, Tesha Nyte took Nightfall with her to her journey to the Wall to aid the Night's Watch in their war against the White Walkers.[7]

Following their defeat at the Second Battle of Winterfell, Rodrik Nyte has been taken prisoner by Jon Snow and Sansa Stark, leaving House Nyte technically without a lord to lead.

House Nyte regains their lands and titles after Rodrik Nyte openly pledges fealty to Jon Snow. However, because of his crimes, Rodrik will still be executed once the Great War is over, with Tesha Nyte presumably taking over the lordship of Darkmyre after her brother's death. 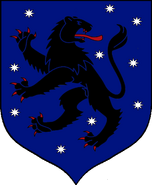 In the A Song of Ice and Fire novels, House Nyte is noted as one of the most powerful vassal families of House Grayburn. They are a mysterious and isolated house located in the dark valley of the Myre. They were one of the first houses to surrender to the rule of the Targaryens, out of fear rather than respect. They eventually rose from their status as a minor noble house once Rodrik Nyte killed his father, Trytas Nyte during the Red Wedding.

Besides Lord Trytas, the members of the family in the books are:

Rodrik, and his four older sisters are the only living children of the Nyte household. It is unknown how the four other sons died, but it is implied that Rodrik killed them to ensure his position as heir.[8]

Retrieved from "https://gameofthronesfanon.fandom.com/wiki/House_Nyte?oldid=54980"
Community content is available under CC-BY-SA unless otherwise noted.